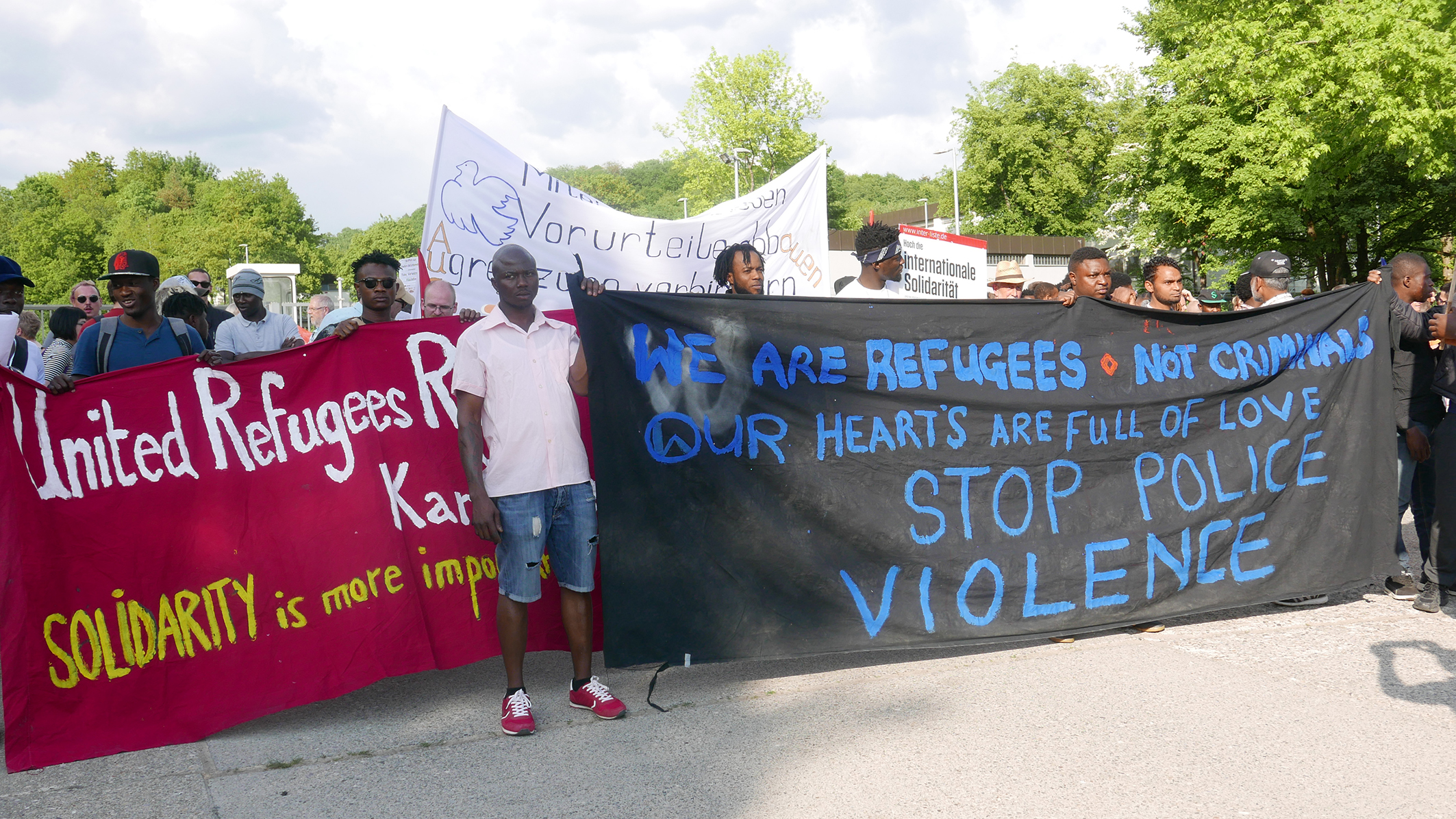 Posted at 14:35h in Allgemein by aino aino

Ellwangen has become a symbol of our protest!

Trial dates before the Ellwangen district court on March 14, 2019 cancelled!

Detained refugees must be released.

Since May 3, 2018 various groups and trial observers have presented criticism of the brutal police operation carried out by 500 officials at the first reception centre in Ellwangen. The police operation itself triggered more than 25 criminal proceedings. Letters and e-mails to the police headquarters in Aalen, to the democratic factions in the state parliament and to the Ministry of the Interior, Digitisation and Migration were not answered, or only partially or briefly. Evidently there is little interest to question the legality of the police action.

After the first trials began at the Ellwangen local court in July 2018 and a refugee was sentenced to six months in prison without probation for assaulting the police (tätlicher Angriff), there were already serious doubts about the legality of the police operation. Shortly afterwards, various groups wrote a multi-page inquiry to the Aalen police headquarters. The letter was sent to all democratic factions in the Stuttgart state parliament. It was also brought to the attention of the Ministry of the Interior.

The letter of 29 August 2018 already pointed out that “there was sufficient time between the protest action on 30 April and the police action on 3 May 2018 to obtain a court order. Since the time span between the two police operations was long, this does not constitute an exigent circumstance (Gefahr im Verzug)”. This point was taken up now by the judge of the Ellwangen local court, because also rooms in a refugee accommodation are protected by the Basic Law article 13 GG “inviolability of the home”.

After further proceedings at the district court Ellwangen and issuing of orders of punishment (Strafbefehl), numerous further inhabitants have taken legal action. In one case meanwhile the proceedings were terminated (Einstellung). The three scheduled trial dates for March 14, 2019 have been cancelled. The background to this is that the court has given up on the public prosecutor’s office to conduct further investigations. The proceedings are continuing, but hearings will not take place due to this court order for the time being. It is obvious that the police raid had no legal basis. And if a search has not been lawful, defendants did not make themselves punishable. In this context, we demand the immediate termination (Einstellung) of all cases and the annulment of all sentences already imposed on residents of the camp. We also demand the release of the detainees!

Alassa M. took legal action before the Stuttgart administrative court against the police operation of May 3, 2018. Since his legal re-entry and renewed application for asylum, the public prosecutor’s office has tried to criminalise him in connection with the protest in Ellwangen and to present him as a criminal. Months later, criminal investigations are initiated and orders of punishment (Strafbefehl) issued. The impression of a political guideline by the Green Party – CDU-led state government, in particular by the CDU-led ministry of the interior, is obvious here.

On Thursday March 14, 2019 we call for a protest to Ellwangen. We would like to commemorate the police operation that took place exactly a year ago in Donauwörth and of the questionable, violent role of the security personnel in the mass camps, especially in Bavaria. Mass camps, ANKER centres or first reception facilities are increasingly revealed as state institutions in which more and more basic and human rights of the residents are latently undermined. These institutions are increasingly developing their own dynamics and questionable power structures, which enable police operations such as those that took place in Ellwangen, Donaueschingen, Donauwörth, Plattling, Bamberg, Fürstenfeldbruck and other camps. We understand the protest in Ellwangen on March 14 also as a protest against these state power centres, which in the end can only be classified as a stage on the way to sealing off refugees and eliminating the right to asylum. Together we must put a stop to this development.