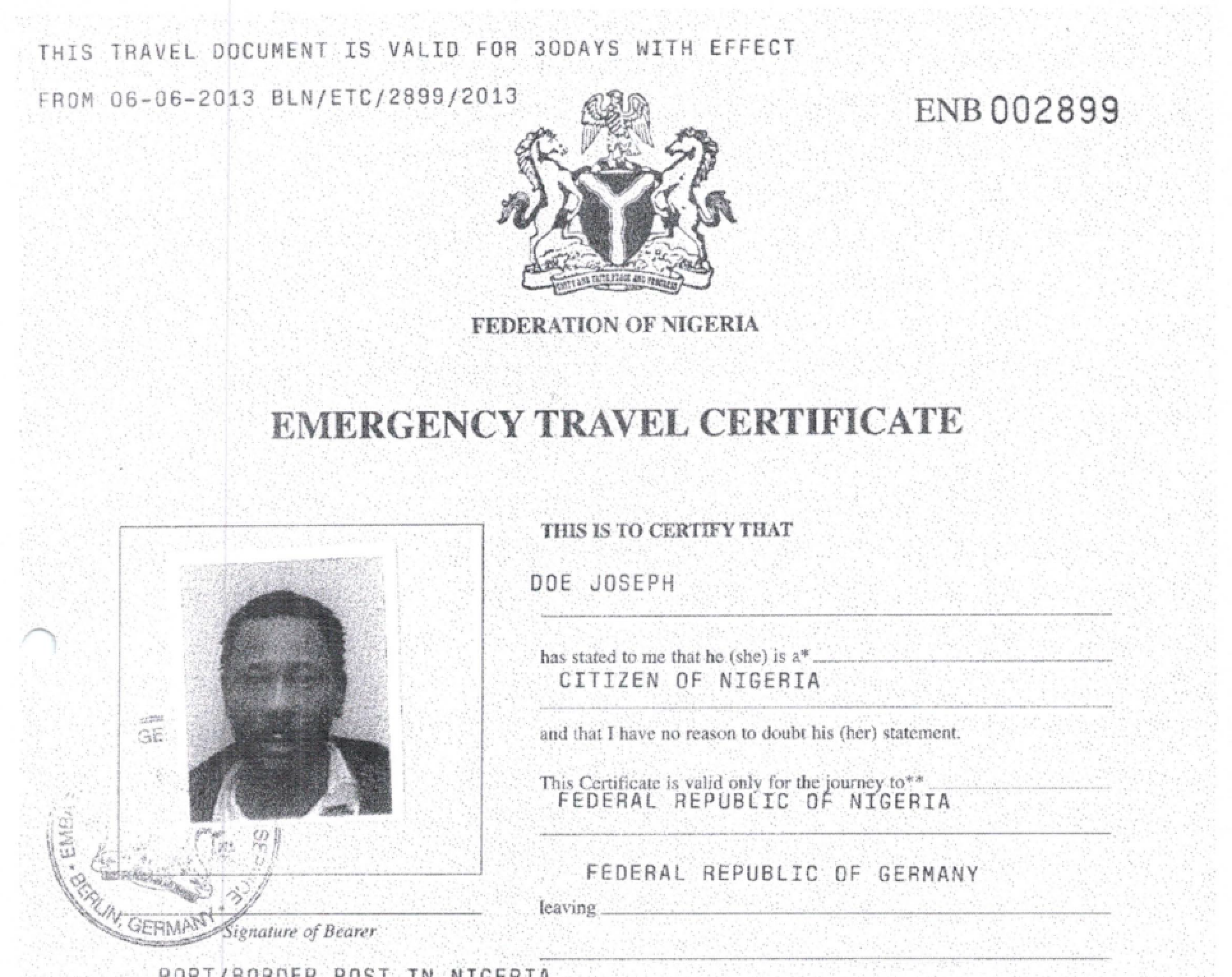 Posted at 22:41h in Allgemein by aino aino

Yusupha Jarboh, a Gambian citizen, was deported with a charter flight to Nigeria on 6th June 2013 after a Nigerian emergency travel certificate had been issued to him by the Nigerian Embassy in Berlin. Jarboh was identified as a Nigerian citizen in a MOBILE EMBASSY HEARING* of the Nigerian Embassy in Munich on April 11th 2013. After 19 years in Germany he landed in Nigeria, a country foreign to him, without money, luggage or necessary travel documents to get to Gambia. It took him weeks to reach Banjul.

While Jarboh was still sitting in detention pending deportation, his case became known to people mobilising against the deportation hearings of the Nigerian embassy in Berlin (see also Rex Osa). The activists demonstrated in front of the Bavarian Landtag and submitted a petition to the representatives to prevent the deportation of a man falsely identified as Nigerian. Later they received a letter from the Bavarian Ministry of the Interior stating that Jarboh had already been deported and that his nationality had been confirmed as Nigerian. In 2014 the activists Rex Osa and Kin Chui visited and interviewed Jarboh in Banjul. Concrete evidence was needed on the deportation collaboration of the Nigerian Embassy in Berlin and to defend over 20 activists who were facing charges of the involvement in the occupation of the embassy. The occupation took place in October 2012 after repeated occupation warnings in case MOBILE EMBASSY HEARINGS* would not stop.

Jarboh’s file demonstrates how German immigration administration is criminalising „undesired“ foreigners until it is able to deport them.

Jarboh arrived in Germany from Gambia in the summer of 1994. Asylum application was the only way for Jarboh to enter Germany where he wanted to work. He sought asylum as Joseph Doe from Liberia. According to his testimony, using another identity was the recommended strategy to resist immediate deportation in face of likely rejection (BLEIBEPERSPEKTIVE*). Jarboh’s application was rejected five weeks later in September 1994 as „manifestly unfounded“. He got his first DULDUNG* (suspension of deportation, „toleration“), in 1995 on grounds that there was an ongoing conflict in Liberia. This decision was revoked in 1999. Afterwards Jarboh still managed to avoid deportation as he didn’t have a passport or a passport replacement. He was further „tolerated“ in Germany. He was refused a work permit and compelled to stay in an asylum accommodation (LAGERSYSTEM*).

German authorities started to pressure Jarboh to identify himself. He was brought to different MOBILE EMBASSY HEARINGS* – twice by the Liberian Embassy, in April 2001 and September 2011, and three times by the Nigerian Embassy, in August 2007, June 2012 and April 2013. The protocols of these hearings (Protocol Liberia 2001, Protocol Nigeria 2007, Protocol Liberia 2011, Protocol Nigeria 2012) testify both of the colonial-racist identification methods and of Jarboh’s resistance.

Jarboh was repeatedly charged with regular criminal offenses and with breaching immigration law. He was charged with not having a passport, on another occasion with „illegal residence“ and of the breaching of RESIDENZPFLICHT* (internal movement restrictions for third country nationals in Germany), all crimes according to the § 95 of German Aufenthaltsgesetz. All these legal proceedings form part of the strategy to pressure „tolerated“ subjects. Jarboh also received an AUSWEISUNG* but could not be deported as he had no identity documents.

The foreigners’ authority responsible for Jarboh in the Bavarian Kempten in Allgäu finally won the struggle. Jarboh was put on a charter flight to Nigeria on 6th June 2013. A letter in Jarboh’s file reveals that his seat had been booked before he had been identified as a Nigerian. The identification took place in the third and last hearing by the Nigerian Embassy in April 2013. The second hearing in June 2012 had not excluded Jarboh’s Nigerian identity but concluded that further evidence was required to prove it. Before the third hearing in April 2013 Jarboh’s mobile phones were confiscated. On April 10th, a day before the hearing, Jarboh was put into detention. The foreigners’ authority wanted to make sure that he would be boarded on that charter flight to Nigeria on 6th June. Activists tried to get Jarboh out of detention, in vain. After the hearing a Nigerian travel certificate was issued by the Nigerian Embassy. Some Nigerian telephone numbers found in one of Jarboh’s mobile phones were for the authorities sufficient evidence of his Nigerian nationality.

Yusupha Jarboh tells about his experience with the German authorities in this video interview.